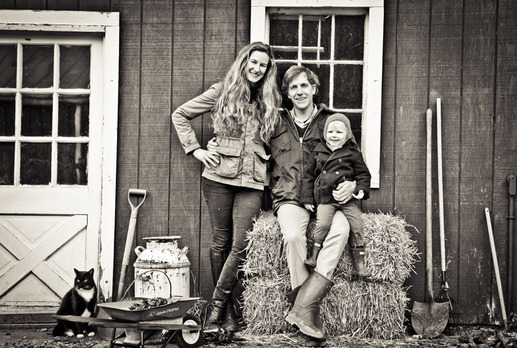 Although The Old Millpond Farm is in its infancy, farming is not an entirely new concept to its owners. Eddie  began his first small farm in coastal California in the 1990's long before "farm to table" became a cliché. His inspiration came from a life-long interest in gardening and the organic movement, a passion for food and cooking, and a background in science and ecology. He took an artisan approach to his first farm by following a simple but often overlooked principle......focus on quality.

Being solely responsible for every step in the growing process, he tilled and maintained the soil entirely by hand without the use of machinery. It was a practice in simplicity- being close to nature. He soon found that chefs of a budding California wine region were especially appreciative of his efforts. The vibrant produce from this little hand dug garden was distinguishable and soon became a regular highlight on daily menus.

The relationships that developed from peddling his unique produce created opportunities for Eddie to work in the kitchens of various restaurants in the area. He found moonlighting in the "back of the house" to be fun and a great opportunity to learn. While honing his kitchen skills, he realized that he was working with his own food along every step of the "farm to table" continuum...soil-seed-nuture-harvest-market-deliver-prep and "plate up" to a satisfied customer....."ORDER UP!!!"

Moving on with his career  and studies, Eddie found himself in the San Francisco Bay area hiking the green hills on weekends in search of open space, fresh ocean air, and wild edibles. How surreal it was to be transported from San Francisco's very urban Mission District to the crisp verdant Northern California coastal hills teaming with wild dandelions, porcinis, chanterelles, and hedgehog mushrooms. Again, Eddie found some very appreciative award-winning chefs who wrote his provisions into their menus.

Life  changes.. and Eddie moved from California to be with the love of his life, Simone. The couple settled in northwestern New Jersey due to its open space and proximity to New York where Simone works in the fashion industry (simonesoernsen.com). The couple now lives on a river and are enjoying raising their 2 young sons in the country.

In a twist of fate, their life-long dream came true when a 2 acre corn field went up for sale in the neighborhood. At the bottom of the property was an old mill pond on the banks of a river. What a beautiful piece of land; ecologically important and rich in Native American, colonial, and farming history. The two had been spinning off ideas and dreaming about something like this for some time. And, as if it was always meant to be, they began drawing up plans for an organic farm in The Garden State.

Dreams do come true. Welcome to The Old Millpond Farm.